The Concord Fire Department’s communications center began operations as a regional center for the Capital Area Mutual Aid Fire Compact in the early 1970’s dispatching for the Concord Fire Department and four additional communities. In approximately forty + years of service, our capabilities have grown such that we now dispatch for twenty-two communities and three additional emergency services providers.

We are presently in the process of a complete upgrade of the dispatching software which includes a GIS Mapping component for incident processing by the end of 2018 and replacing the use of our town numbers with resource type and number to the actual names of the communities with the apparatus type and identification number which begins in April of 2018.

The center is also the primary statewide control point for the New Hampshire Fire Mobilization Plan.

The communications center is staffed with nine full-time employees, including a Supervisor, four Lead Dispatchers and four Dispatchers. We operate with two dispatchers on duty 24-hours a day. In 2017, the center handled 24,329 incidents in an area encompassing 769 square miles with an estimated population in 2016 of 132,592 residents.

Since 2005, the Communications Center has received grants which total approximately $1,923,945 to replace and upgrade needed equipment for the communications center. Grant funded items include new radio base stations, dispatch console control equipment (including microwave connections to all our primary radio sites), simulcast radio dispatching of incidents, microwave radio connection to Lakes Region Communications, surveillance camera system, upgrade of our dispatching software and all computer hardware. Capital Area Mutual Aid Fire Compact and Lakes Region Mutual Aid Fire Association have entered into an agreement to provide uninterrupted dispatching services for each other’s Communications Center in case a catastrophic event occurred that would render either Communications Center inoperable. In this situation, the other center would be able to take over each other's operations including telephones, radio dispatching, incident recording and reports. 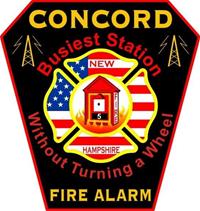