We loved the energy and ideas from our meeting on January 19, 2023. More than 120 people came out to discuss plans for the Merrimack River Recreation and Open Space Corridor.  Concord TV recorded the meeting in case you were unable to attend (below). The presentation from the meeting is included under "Resources" on the right.

In the FY23 approved budget there was an Capital Improvement Project that includes Kiwanis Riverfront Park, Everett Arena and the land on the east side of the Merrimack River from Loudon Road down to Terrill Park. The area from Kiwanis Riverfront Park down to Terrill Park was classified as the Merrimack River Recreation Corridor.

CIP60 reads: “Community Visioning Charrette to establish a master plan for Kiwanis Park, the Everett Arena, and City owned agricultural land between Terrill Park and Loudon Road (collectively referred to herein as the Merrimack River Recreation and Open Space Corridor). The goal of the process is to develop a comprehensive vision and strategy for these assets. Stakeholders include, but are not limited to, the public, Parks and Recreation Advisory Committee (RPAC), Arena Advisory Committee, Conservation Commission, City Council, Concord Crew, friends of the Skate Park, Friends of the Merrimack River Greenway Trail, as well as staff representatives applicable City Departments. From this process, a definitive Master Plan shall be developed and implemented for these properties.”

Around 2012, the Parks and Recreation Department staff started to look at options to improve Terrill Park. With growing community focus on development of Terrill Park, a formal Master Plan was created and was approved in 2017. The park is fully designed and permitted. Working with the Friends of Merrimack River Greenway Trail, SPAC, Concord Rotary and the City Phase 1 of the Master Plan has been built, the remaining phases are included in the CIP outyears.

Around 2015, staff from the Everett Arena and the Arena Advisory Committee started to look at the long term needs of their operation. As part of that process they recommended an addition be added on the North Side and the need for better parking that supports both the park and the arena operations. Understanding the Kiwanis Riverfront Park is somewhat unattractive and not welcoming to the entire community the city started to look at way we can improve the park. In 2017, city staff from the Parks and Recreation Department, General Services Department, Recreation and Parks Advisory Committee, Everett Arena Advisory Committee, Concord Crew and the skateboard park community started working together to look at the future Kiwanis Riverfront Park.

It was the consensus of these bodies to look at improving existing park amenities if an overall master plan should be created. Specific improvements could include relocation of the skateboard facility to another location within the park, as well as the creation of a large lawn area to support special events. The updated plan should also show improvements to the parking lot to support the Arena and Park and take into consideration of future expansion plans for the Everett Arena.

In addition to the Terrill Park Master Plan and conversations about the Arena and Kiwanis Park, the city started designing the next section of the Merrimack River Greenway Trail on the east side of the river that will connect Terrill and Kiwanis Riverfront Parks. A section of the new trail from Loudon Road down along the east side of the Merrimack River (4,000 ft. +/-) is now under design and permitting. Working with the Friends of Merrimack River Greenway Trail, the city was awarded an LWCF grant to help with construction of the section. We hope to build this new section in 2023.

Kiwanis Riverfront Park is located on the banks of the Merrimack River. The site is approximately 14 acres in size with 1,400 feet of waterfront. 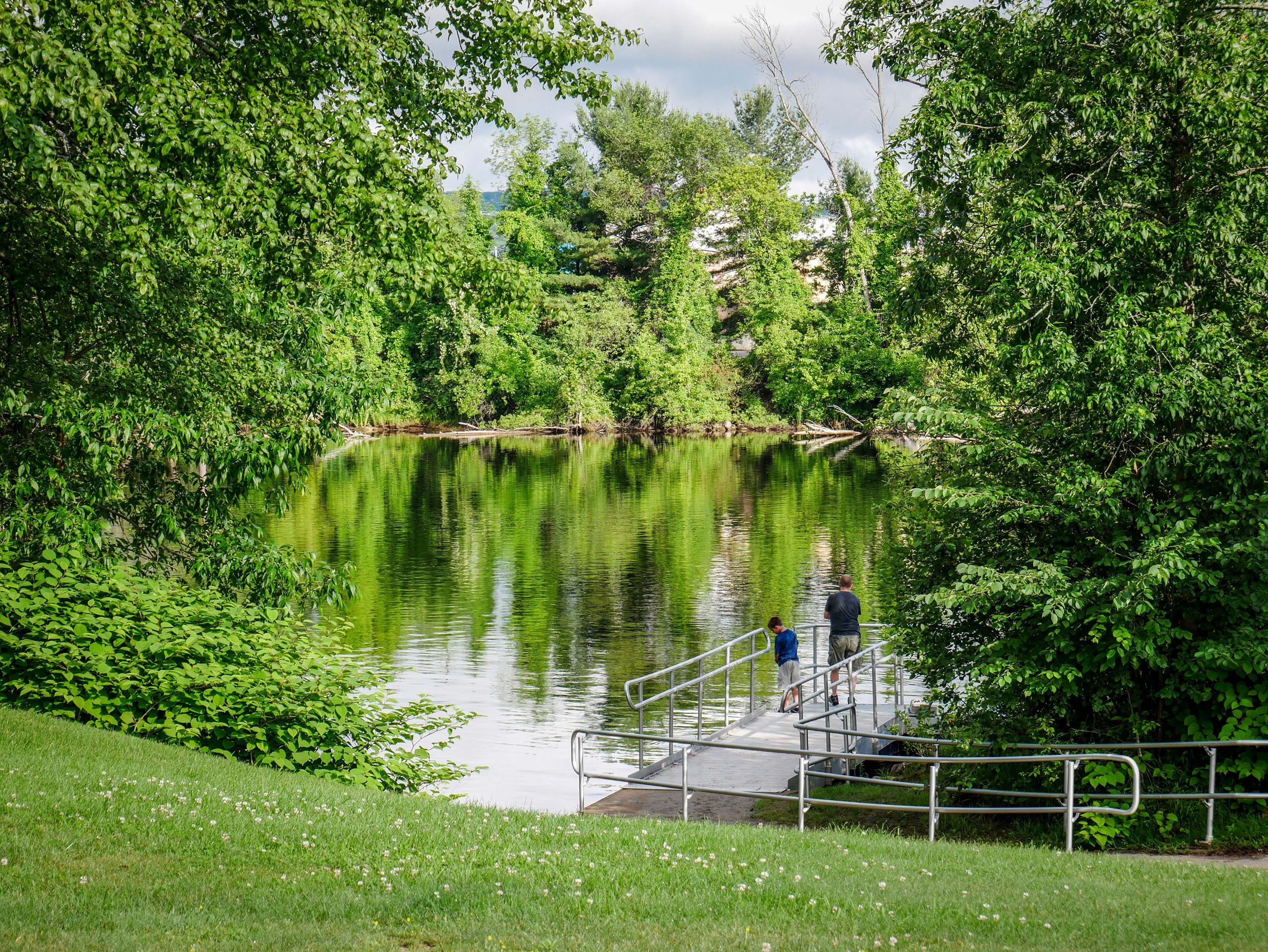 The Everett Arena is located on the same property. The park also features some green space, short walking trail with benches, Concord's only skateboard park, community boat ramp and is home of Concord Crew. The existing park has good overall access to the Heights Area of Concord as there are sidewalks to that section of our community. Connection to the west side of the Merrimack River also has sidewalks, however several busy intersections need to be crossed. The new Loudon Road Bridge and possible I-93 improvements should improve access to the park. 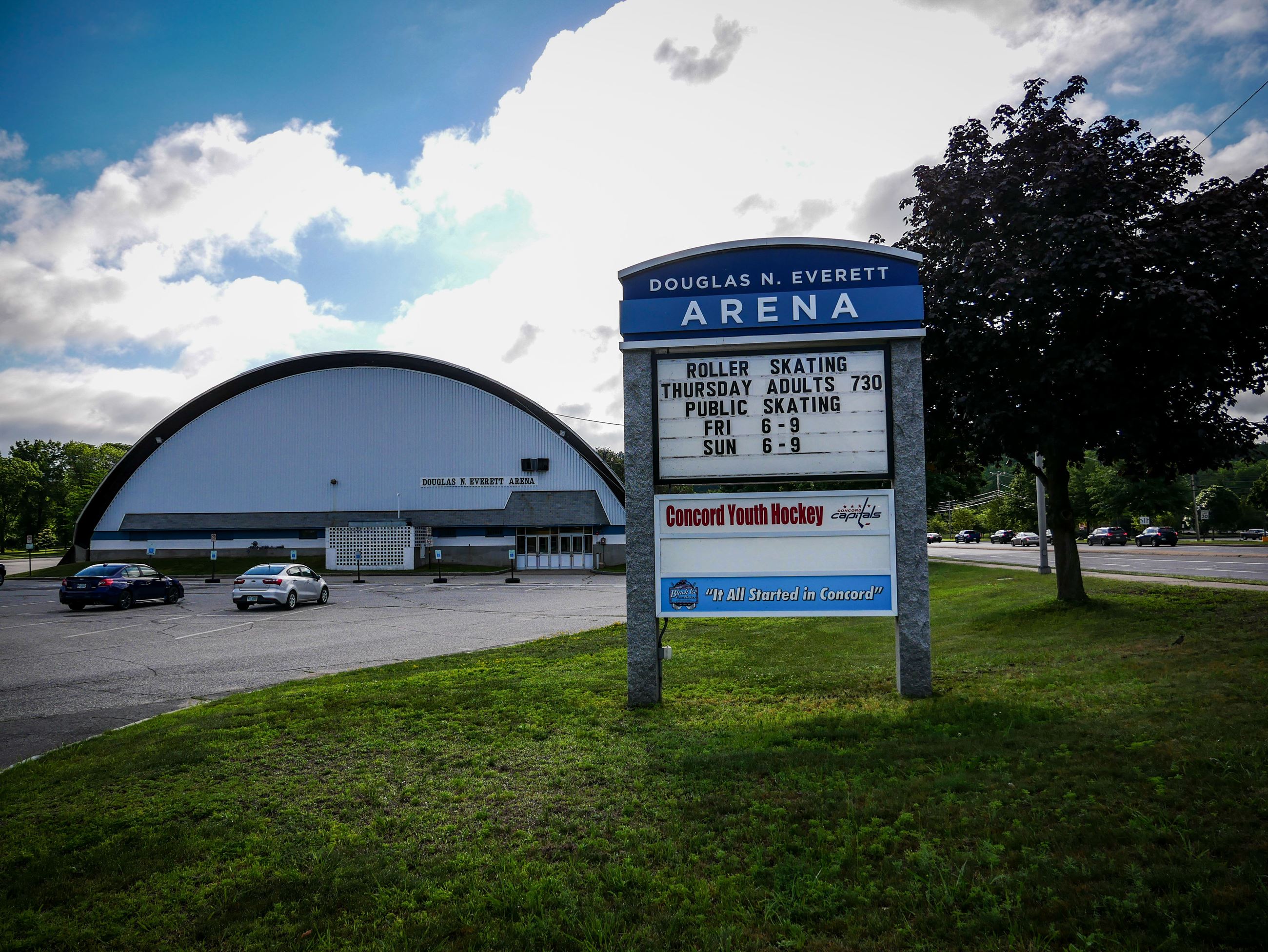 In 2019, City Council approved funds for them to hire a firm to look at future space needs. The staff and arena committee developed a plan that enhances arena operations by adding a new lobby, meeting rooms and shows a restaurant with a deck overlooking the Merrimack River. Their arena expansion concept plans can be using Quick Links top right of this page.

The city's only skateboard park is located in the Kiwanis Riverfront Park and was built in 1994 in partnership with the city and volunteers. In 2021, a group of skaters approached the Parks and Recreation Department wanting to learn how they could help upgrade the existing skateboard park. The skateboard group came to several Recreation and Parks Advisory Committee (RPAC) meetings to discuss best way to move forward. RPAC created a sub committee to work with the skateboard group. Through the subcommittee, the group development concepts of what park features the ideal new skateboard park would have. In 2022, the skateboard group started a 501c3 non-profit to help support future improvement plans. You can review their site visits and final recommendations here. To stay connected, follow their Facebook page and visit their website.

Concord Crew has been based out of Kiwanis Riverfront Park for over a decade and is a 501c3 non-profit. Their operations at Kiwanis Park include: a boat house, floating seasonal docks for their boats, boat storage and all fundraising efforts to support their organization. Concord Crew would like to continue and even expand the number of races, programs and events they offer. Visit their website for more information.

Starting in 2007, the City began acquiring several contiguous parcels of land south of Gully Hill along the eastern banks of the Merrimack River. In total, the City acquired 114 acres which is managed as open space with approximately 57 acres leased for agricultural use. The remainder of the property consists of wetlands or protected riparian buffer. The land was purchased using conservation funds with the requirement of maintaining the land for conservation purposes, including the protection of prime agricultural soils, wildlife habitat, scenic open spaces, and passive recreational use of the property.

The city is currently negotiating a lease with farmers that will utilize the agricultural land for crop production that adheres to organic farming standards, with goals to achieve organic certification in the future. The farmer will hold a five-year lease starting with the 2023 growing season, with options for four, five-year renewals.

The property currently remains available for pedestrian access for wildlife observation, hiking, snowshoeing, cross-country skiing, hunting, and other similar low-impact, outdoor recreational purposes. In accordance with city regulations, motorized vehicles and camping are prohibited. The Merrimack River Greenway Trail is proposed to be constructed on the western portion of the property near the banks of the Merrimack River.

Concepts of an elevated boardwalk connecting Terrill Park to the Agricultural land to the north were also development by the Friends of the Merrimack River Greenway. In 2020 the City started design and permitting of the section of greenway trail from the general area of 6 Loudon road south along the river around 4,000 feet towards Terrill Park. In addition, the city applied for and received another Land and Water Conservation Grant to help build the new section. The Friends of the Merrimack River Greenway Trail agreed to help raise donations needed for the match requirement of the grant. We hope to start construction of this new section of trail by the end of 2023. The section of trail that is currently under design can be viewed here.

Once the boardwalk is built, residents and visitors alike will be able to walk/bike from downtown Concord by crossing either the Manchester Street Bridge or the Loudon Road Bridge. This new connection will also give improved access for residents living on both sides of the river.

For more information on the Friends of Merrimack River Greenway Trail please visit their website.